Seems like every time I turn around, I see another debate centering on Star Wars.  (The latest I tripped over is a series of articles by Sci-Fi heavyweight, David Brin.  Like it or love it, Star Wars was seminal work that influence so much after it, as least visually.  What about Star Trek, how does it compare? 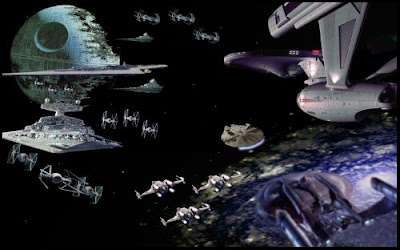 So here's me rolling several debates into one, and I'm interested in your thoughts:

Seems an easy enough question.  (One I've debated with good friend Randy.)  It's got laser guns and spaceships.  I subscribe the Orson Scott Card knee-jerk 'Fantasy has trees, Science Fiction has rivets' theory on setting, meaning that's enough.  Spaceships are enough.  It's Sci-Fi.

And here's the part David Brin gets on (echoing Randy's point-of-view), Star Wars (as compared to Star Trek) doesn't really explore any of the new ideas in a way that makes good science-fiction good.  It's not thought provoking.  It's mythic.  In terms of a few, super-powered, gifted royalty fight uber-evil Sauron-style forces, it fits all the tropes of Fantasy.  It's only superficially science-fiction.

Brin makes his points here:
http://www.salon.com/1999/06/15/brin_main/
He's also got a bunch of quibbles with the new movies that are fun to go through if you're into that.  I can't help but enjoy that bump for Star Trek, too.  As visually awesome as the Star Wars movies are, I've always been more of a Trekkie.
More Brin & Star Wars here: http://www.davidbrin.com/starwars2.html

And Just to slip in the sophomoric question of 'Could the Enterprise take out the Death Star', and further bring home the mythic nature of Star Wars vs. the grounded science of Star Trek, here's the page of Engineer that mapped out the various capacities of various ships using source material.  Short version, the tiny little ship Boba Fett uses could wipe out half of Star Fleet.
http://www.stardestroyer.net/Empire/Essays/FiveMinutes.html

I also feel there should be a plug *against* using the Joseph Campbell model for story structure as a model for your books in here, taking the over-simplicity of Star Wars Ep IV as an example.  I love Campbell's work, but it's meant as a comparison of mythic structure, an examination of what cultures share, and their differences.  Not as a how-to for screen writers or novelists.  It's that kind of simplistic thinking that gave us midiclorians.  (Wow, this post is super-rambly.)